Our Lady of Guadalupe’s Invitation to Miracles Workshop

Greetings I am Maria, Our Lady of Guadalupe, Universal Mother; Mother of Hope, Liberty, Freedom and Love; Mother of Miracles. My children I come to speak to you of the reality of miracles, of the ability to create and co-create the desires of your innermost heart and the heart of the universe and to birth them as one. The differentiations between natural, supranatural and supernatural have been artificially erected by those who are power hungry and wish to control the ideas, lives and actions of others. Let me speak to about why I have chosen to come to you as your beloved Lady of Guadalupe once again at this time. In 1531 the beliefs being presented to the indigenous peoples of Mexico were not intended to supplant their belief systems but rather to integrate with them in a proactive presence called God. This God made him/herself known in nature and the daily lives of mankind. Many of the people’s were suspicious and frightened by the new regime called the Holy Roman Catholic Church that claimed that it would supercede the people’s direct connection with the Godhead and speak to God on their behalf. People were puzzled that an intermediary was or would ever be required to act as a go-between between themselves and their God who spoke to them daily through the flowers and trees and harvests. The feminine principle was alive and well in that culture but there was also the residue of the thundering punishing gods and that was not of Love.

I wished my children of America to know of the gentle nurturing of the Mother’s Love, the love that would cherish them and hold them, heal them in their hours of need. I also wished to make it clear to those who believed in their role as intercessors that my link with the people would not be interfered with – that perhaps they should listen more closely to those they had come to convert. The gifts was to be given and received by both groups, but the deliverers of my son’s messages also had a great deal to learn from their new converts – not the least of which was humility and awe – the belief in miracles – miracles that could happen to the poorest. The meek are the inheritors of the Earth in the unfoldment of my plan – do not forget that. Also do not forget that they are shown the way by the trusting and courageous, by those who dare to dream and live their dream.

My beloved Juan Diego, who by the way returned to you as Pope John the 23rd (once again to restore the people’s church), trusted that he was chosen to witness my Divine Presence. He trusted not because he understood the intricate workings of the Universe as taught by scholars of the time, but because in his personal relationship with Creator Source, he allowed for the possibility of miracles. Juan Diego understood that the veil between worlds is but an illusion and was willing to act upon what he knew to be true, even in the face of skepticism, derision and abuse of his physical form. Juan persevered not for his own glory but because he knew he had a role and a place in the unfoldment – he understood his role as a bridge between worlds, times, cultures and classes. His own integrity would not permit him to behave in a different manner. That is the story of the miracle of Guadalupe my children – not my appearance, not the creation of this beautiful chapel. The miracle of Guadalupe was that this poor peasant man had the grace and quality of awe to recognize a genuine message and to act on it with courageous intent. The miracle is that even with Juan’s ferocious tenacity he maintained his sense of humility and purpose in his service to his family, his Lady, and himself. He had lost his wife, he had no money, and he was given what many would have considered a fool’s errand. But what did Juan Diego do – he went in the dead of winter to a hill in the barren dessert to harvest my bounty of roses. In trust of the possible he found the gifts, the riches of miracles, of possibilities that are not thought to be of this world you walk. But make no mistake my children; it was a miracle of faith, of co-creation. If Juan Diego had felt unworthy and incapable there would be no story of my presence in Guadalupe.

So now why is it important for this message, this understanding to be resurrected at this time? Why do I wish for you to know of the expansive possibilities of creation and co-creation? Why do I bring this point for you to examine – to you who already believe in Love and see the miracles daily in your children’s eyes, in the blue of the skies, in the blue of my cloak? Because, my children, it is time for your to expand your horizon of what is possible, it is time to expand your horizon in terms of what you are capable of and why you have come to Earth at this time. Dozens of times I have said to you that the only reason for coming is to be Love and to know the joys of being spirit in form. Many of you have secondary assignments and you take great pride in these, as do we – healer, general, star commander, alchemist. But first and foremost my beloveds you have come to restore Love and that means living in the full potential of your spirit and that by definition excludes limitation.

Dramatic times call for dramatic measures and this is a time of high drama on Earth. It is the favorite creation of humankind – drama. You breathe it in like a summer breeze after a cleansing rain – you love it. So be it, we will work with you in the high drama. of calm, stillness and creation. It is not enough for the legions of angels to ascend to Earth singing Alleluias, it is not enough for you to converse and visit with your star brothers and sisters, it is not enough for you to see the Earth restored to her original beauty. You have need not to stand as witnesses my children, but to do. You are a race, albeit hybrid, of doers. You love action almost as much as you love drama. So the action steps we The Council of Love, my Legions of Light, all Brotherhoods and Sisterhoods throughout time eternal will teach you is how consciously to put into action the principles, power and joys of creation. We will teach you have to love what you desire into form – in your time and reality not ours. We will teach you to understand the nature of creation and the consequences of your choices. You will learn to trust, forgive and surrender to what your heart and soul have been telling you forever. You are a child of God, all powerful, frightened of that power but nevertheless powerful There can be no denying it any longer. It is time to step forward children and learn how to play. Roll up your sleeves – I will join you in the kitchen, the chapel, the bank and the rocks of Sedona. Come, your Mother wishes you to teach you how to be you; I wish to teach you how to claim you heritage, not as penitent victim but as joyous angel that you are.

I have spoken to you from the depths of my being. You are the miracle of my creation but there is a next step to be taken in alignment with One. It is time for you to come of age and assume your place within the multiverse, it is time to claim potential and not shame, it is time to share with your brothers and sister not only of Earth but everywhere the fullness of who you are. This will be amongst the most diifcult undertakings you have ever embraced bcause it challenges the very core of your own definition – the belif of what you are capable of and who you are. I will stand by you and prepare you for this workshop. All that is needed is courage, willingness and surrender. Remember courage does not mean never being afraid, it is the ability to move forward knowing that you are frightened and also knowing in the same moment that you are safe. I do not seek to place you in harm’s way but rather to clear the way out of the drama into the glory. So, this is time to be courageous and create Nova Earth in laughter, play and unlimited potential. I believe in miracles child, I always have. Do you?

I have extended my invitation and await your decision. Go with my blessings and Love always. 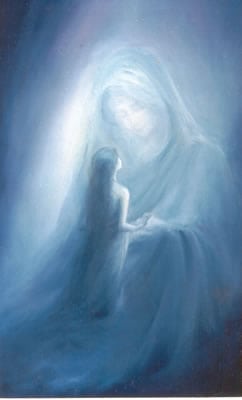 Universal Mother Mary: If You Wish to be Reborn, Say “Yes!”

Archangel Michael on how to create Nova Earth

“Be Your Creator Self: A Message for the Ages” – Video

The Gift of Trust